The most popular way to color an image is to describe the color for each pixel, and this is usually done using the 8-bit per component RGB format. This means that we are going to use one byte to describe the luminance level for each of the RGB channels, for a total of three bytes per pixel.

The “palette” is a correspondence table, in which the colors us selected from a range of possible colors (as described according to the RGB logic) and that are assigned to an index, on the basis of which it is possible to refer to the pixel colour. Using an index requires less space, and it is a technique that aims to reduce memory usage, processing load, bandwidth, as well as RAM or mass storage usage.

Retrocomputers usually have a fixed palette, made up of a limited and preprogrammed set of colors. This implies that the representation of the original colors occurs by “adapting” the color, or by selecting a neighboring one.

As we described in the other topic, “midres” bitmaps are made up of black and white mixels, where the value 1 indicates white and the value 0 indicates black. Since the “midres” uses the text mode, which foresees being able to define a different color chosen from a palette for each character, the mixels can be colored in groups of 2×2. 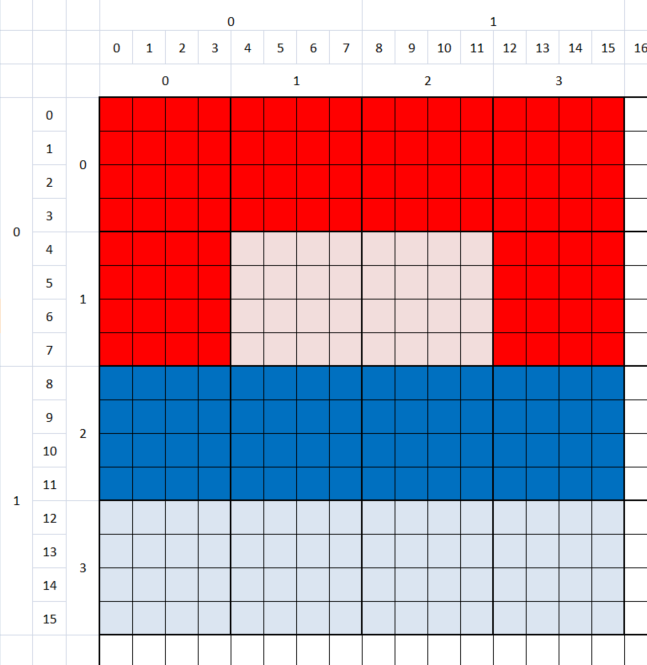 Note that the remaining mixels are off and are therefore black, but they are represented on the diagram with a more subdued color. This serves to underline how, if they were turned on, they would assume the color relative to the character they belong to.

This implies that the coloring of the images is inaccurate, and undergoes a phenomenon called “color clash”.

Coloring a mixel is a less precise process than drawing one, and this is due to the fact that the color of a mixel depends on the color of the character that the mixel belongs to.

At this point, it is possible to actually color the semigraphic character, and the new color will be used to replace the previous one. 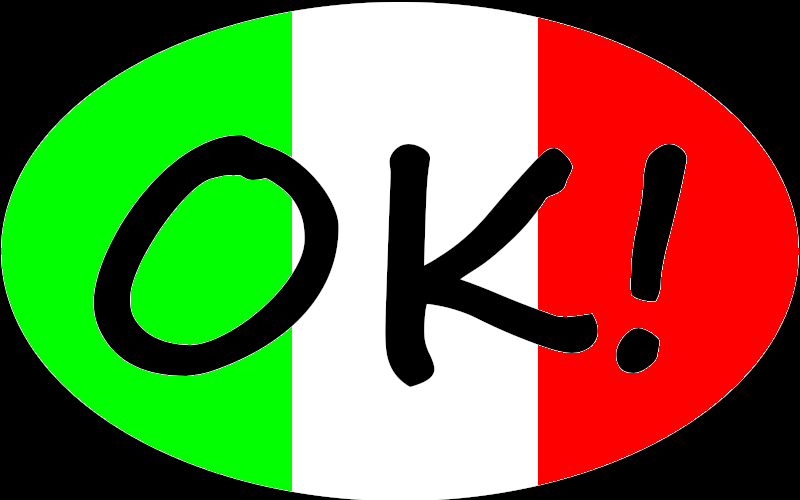 You can use the program img2midres to convert this image into two files (-o, -O) that can be directly loaded into memory (-u) with an indexed palette midres for the Commodore 64 (-64): 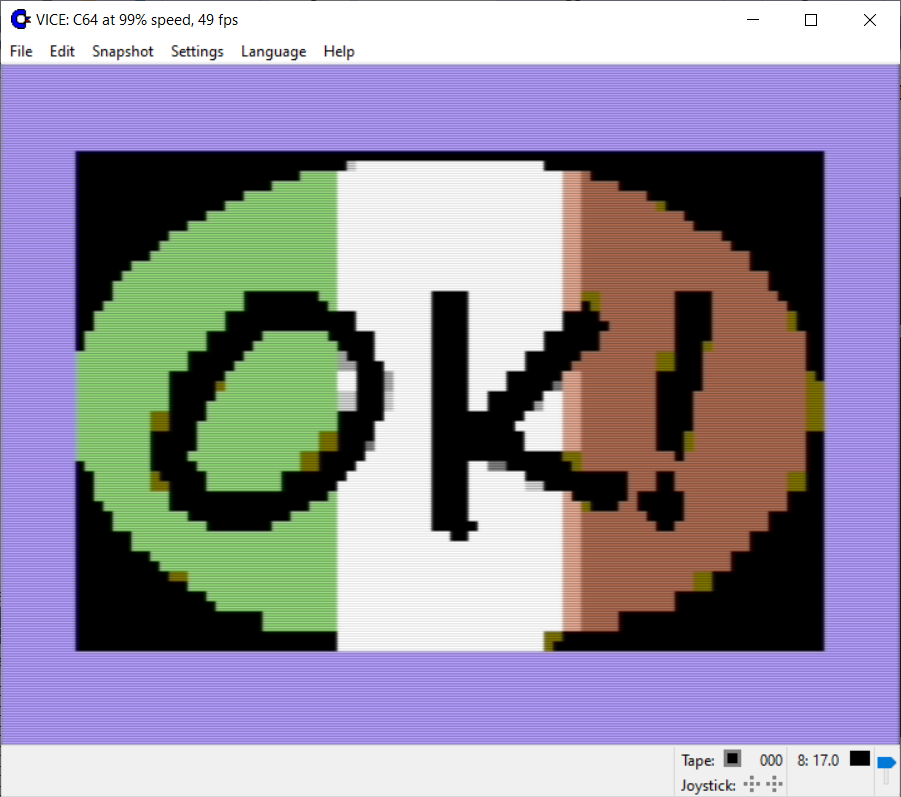 If you have a VIC 20, you can use the same program img2midres to convert this image into two files (-o, -O) that can be directly loaded into memory (-u) with with an indexed palette midres for the VIC 20 (-20): 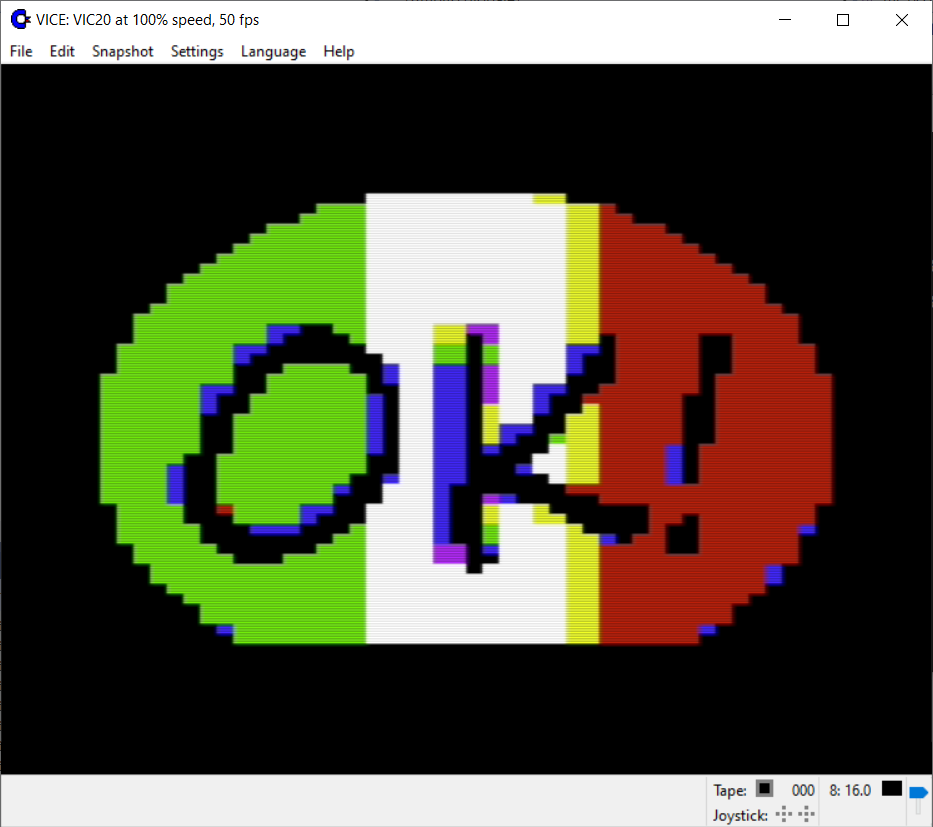 The “color clash” is, in general, a phenomenon caused by the limitations in the graphics circuits of some retrocomputers, where there is the limitation of two colors for each character that makes up the mixel set considered. This limitation arises from the particular memory layout of video processors that support text mode, designed in such a way as to minimize the use of frame buffer memory and thus optimize the display of text rather than graphics. To save memory, the bitmap and color map are stored in separate areas of memory. While the bitmap specifies the status of the individual mixels (enabled or disabled), the color information (or “attributes”) always and only corresponds to the character matrix of the text. This byte encodes, in different ways from platform to platform, the index in the palette to be used. Therefore, each block can only contain 2 colors among those available. Attempting to add a third color in the same area will overwrite the previous color.

For example, if you have an image with four pixels with three different colors, the related mixels will have only one of the three colors. As a result, finely detailed color graphics are impossible, as color can only be applied in the blocks that make up the mixels. To avoid this type of conflict, static graphical displays must be constructed carefully.