EVOLUTION 10 is an evolution based game for COMMODORE 64 home computer. In this game the player assumes the role of “selective pressure” in the evolution of a species. Given a target objective, he/she will have to choose two specimens from those proposed so that they can reproduce themselves and so he/she approaches to the expected result. This game is designed for a single player and it is text-based.

Despite its small size, this game features a complete genotypic representation system. That is, both a mechanism to represent the information stored in the genes and a mechanism, deterministic and clear, for the conversion of these genes in a well characterized individual (ie: the phenotype).

In this small article, I will briefly describe both aspects, referring to the game's source code how this information is represented.

Each individual in the game is described by an individual genetic code, called a genotype. This code corresponds to the juxtaposition of five genes, each of which is responsible for coding an aspect and providing instructions on how to generate the actual individual. Each gene contains a number ranging from 1 to 4, and represents specific information.

The illustration shows the possible alternatives, as the value contained in the gene varies. It is essential to underline that each gene can assume one and only one of these values, and that a combination of five genes uniquely determines how the individual will appear. 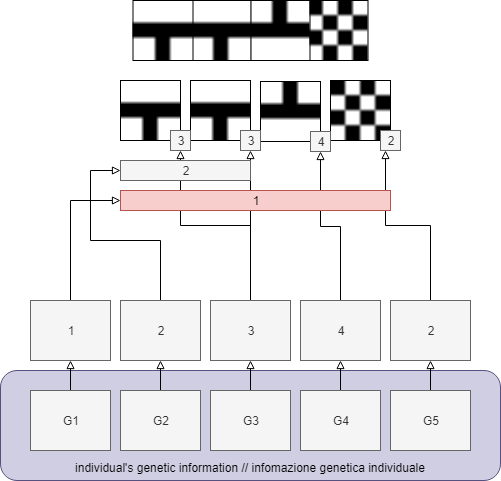 For example, the genetic sequence 12342 encodes an individual as shown. By changing a single gene, the individual's appearance will change dramatically.

When a player selects the future two progenitors of the new generation, he/she is in effect choosing two individuals whose “blending” of the genetic code will determine the progeny.

In practice, each of the child's genes will randomly take one of the genes of one of the parents. As a result, the child will look a little like the first parent and a little like the second parent. It is possible, although rare, that he takes characteristics from a single parent. In that case, the other parent's contribution will be ignored.

Since the mixing is only between existing genes, a random mutation mechanism comes into play. This mechanism simulates both defects in the mixing mechanism of the genetic code and actual environmental changes.

Let's consider the example of the previous mixing. In this case, it is possible (although not certain) that one of the genes is not passed on intact from either the first or second parent. In such a case, the appearance the individual will have will be similar to that of his siblings, but to some extent it will be different.

In conclusion, the EVOLUTION 10 game can be seen as an attempt, albeit limited by the conditions of the race in which it is participating, to illustrate how the theory of evolution works. In this regard, we suggest reading the following volume: L'orologiaio cieco. Creazione o evoluzione? di Richard Dawkins.